Keen to play cricket but letting the fact of being female hold you back? – Here are your 7 top excuses busted from Carlene Bender & Old Actonians Ladies Cricket Club

Welcome guest blogger Carlene Bender of Old Actonians Ladies Cricket team, who is here to encourage Ealing women to have a go at playing cricket… 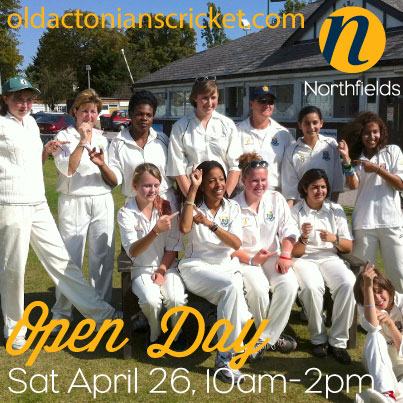 No: our matches last typically 2-5.30pm on a Sunday. Old Actonians Ladies play in the North London Women's Cricket League, where matches are 30 overs long, with each team batting once. This is not Test cricket like on tv!

2. "Cricket is a load of standing around."

No: cricket is a load of running around, especially if you're a fielder trying to stop the ball from getting away. Again, we are actually playing cricket here, not watching it on tv (where you might see half the team standing around in slips – that's not what it's like at ladies club cricket). If you're a bowler you'll be running in and up to bowl the ball. When you're batting you'll be running up and down to score runs; if you just stand around you get out.

Of course not. We have a giant team kit bag full of extra bats, helmets, pads, gloves, etc and we're always sourcing funding for new extra kit. So you don't have to buy a single piece of equipment until you absolutely want to, until you know what size bat etc suits you.

4. "We have to travel a long way to play matches."

Nope again. Half our matches are at home right here in Ealing – on Gunnersbury Drive W5 4LL. The other half of games are within easy reach – from Ickenham through Hampstead to Wanstead.

5. "There aren't any women's cricket teams to join."

Our league has all of 13 teams in two divisions competing for a league title as well as a cup. There are other leagues, including the Southern League, where we used to play, as well as women's teams at county (and national) level. Old Actonians is the only women's team in West London, however read our story here.

6. "Women's cricket is not serious"/"Women are not good at cricket"

I refer you to the Ashes-winning England women's cricket team.

Rubbish. If you're interested in learning how to play or have played before and would like to #comebacktocricket, we'll be running a 10-week Ladies cricket coaching course from May 1 to mid-July (£3 per session). Beginners are especially welcome. Old Actonians offers games for all level of player: from occasional softball Mixed Pairs fun games, to weekly hardball league cricket. Come and see what we're like at our club's Open Day on 26th April. 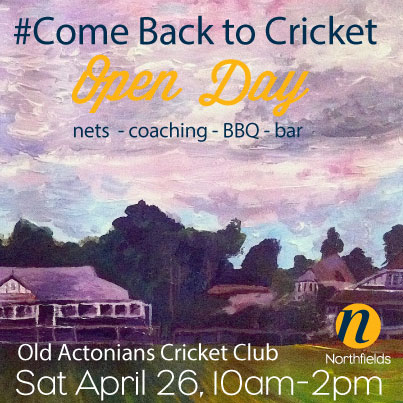 3. There are fewer clubs/games for women. Not every cricket club has a women's team.

4. Ladies home teams can mark out a smaller boundary (there are no specific rules about the size of a boundary)

Carlene Bender is "official" flag-waver for the Old Actonians Ladies Cricket team, only coming in to bat at number 11 when needed, and as such has scored 1 run in four years. Being chairman of the Ladies section means being allowed to bowl the odd over near the end of a game when we have a lot of runs to spare. Carlene, a Trinidadian living in Ealing for the past 10 years, is busy organising the Old Actonians Cricket Open Day on Saturday 26th April, 10am-1pm, to be held at the club's home ground on Gunnersbury Drive (opposite Gunnersbury Park north entrance, Ealing W5 4LL).

All new and lapsed players as well as more practised cricketers are welcome to join in the fun and games and barbecue on the day. When Carlene is not tweeting about the Open Day from @OldAs_CC or @OldAsLadies, she is publishing independent local business magazine 'Contactus Ealing' Speak to Carlene on Twitter @ContactusEaling.

Thank you to Carlene for giving us the inside scoop on the only ladies cricket team in West London – and it's here in Ealing!