A new era for #EalingHour

When I was approached by Carlene Bender @ContactusEaling and Amy Calver of @clarence_alabam via the Northfields Twitter handle @Northfieldslive and asked to host #EalingHour I jumped at the chance. 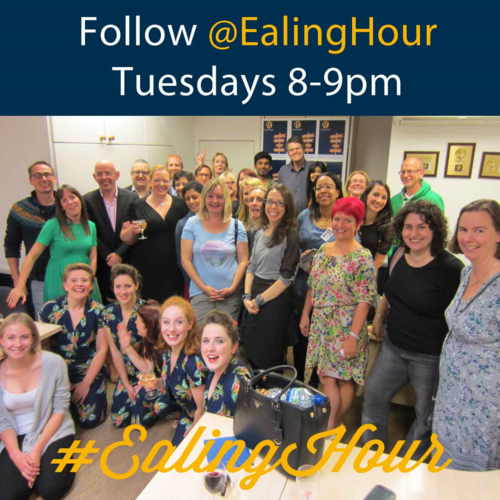 #EalingHour tweeters at a tweetup in September 2014 hosted by Northfields

Here was a way for me personally to give back to the community and for Northfields to use its strong social media presence as a family-owned, independent estate agency to be the vehicle that could support a local online event.

That was just over a year ago and #EalingHour has become a fixture in our community.  Every Tuesday between 8-9pm anyone interested in Ealing can tweet using the #EalingHour hashtag to join other tweeters in a discussion about anything relevant to Ealing.

We are regularly joined by charities, churches, schools, businesses, politicians, journalists and interested residents to chat about all things Ealing.

As #EalingHour marks its first anniversary, we are transitioning to a new way of doing this weekly event.

After hosting #EalingHour for over a year, I’ve made the difficult decision to leave Northfields to pursue new challenges with one of Northfields’ partners.  This means that I won’t be able to continue to act as #EalingHour’s host.

At Northfields we know how important #EalingHour has been to the community and we want to ensure that it continues to be a fixture in our local area.

Colleen Babcock, Marketing Manager at Northfields will soon be handing over #EalingHour to its new hosts

So we’ve approached several local tweeters who will be taking over #EalingHour via a central #EalingHour twitter handle – @EalingHour.  This will mean that several people can share the responsibilities of hosting and bring their unique strengths and perspectives to this Twitter event.

I would like to thank everyone who has supported me during #EalingHour.  I have been incredibly lucky to get to know you all – and I’ll continue to see you around and about Ealing where I will be continuing to live.